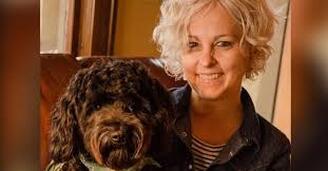 Kate got her writing start when she was a junior in college, and took an expository writing course.  "On the first day, the class was assigned a five hundred-word essay: describe something, anything. At the time, I was convinced that I was a real writer, an undiscovered Eudora Welty or William Faulkner. Understand, I had absolutely no interest in writing. I wanted to be a Writer; and so I put off the work of the essay until the last possible moment. The night before it was due, I went grocery shopping. And sitting outside the Winn-Dixie , perched on top of a hundred-pound bag of Purina dog chow, was a woman with a tambourine. "Girl," she said, when I walked past her, "give me some of that change." I stopped and stared at her.
"That's all right," she said, "go on and look at Bernice. She don't care." She beat the tambourine softly against her thigh and started to sing a song about the moon rising up in the night sky like a gold coin and how it was hanging up there all shiny and new and nobody was able to get hold of it and spend it. She called it a "smug old moon."
When she was done singing, she held the tambourine out to me and I dropped some money in it and turned around and went back home and wrote an essay describing her. I wrote down the words of the song that she sang. I described her broken fingernails (painted purple) and her blue eye shadow and how she sat atop the bag of dog chow as if it were a throne. I wrote how, after I dropped my money in the tambourine she said, "God bless you, baby."
A week after I turned in the essay, it was read it aloud to the class. "There is something extraordinary about this essay," he said, "and I want you tell me what it is." "I'll tell you," he said to the silent, bored class. "The person who wrote this actually took the time to see the person she was describing. That's what writing is all about. Seeing. It is the sacred duty of the writer to pay attention, to see the world." Kate writes for both children and adults and likes to think of herself as a storyteller. She says she is short, loud, hates to cook and loves to eat. She lives in Minneapolis, Minnesota with her dog, Ramona. 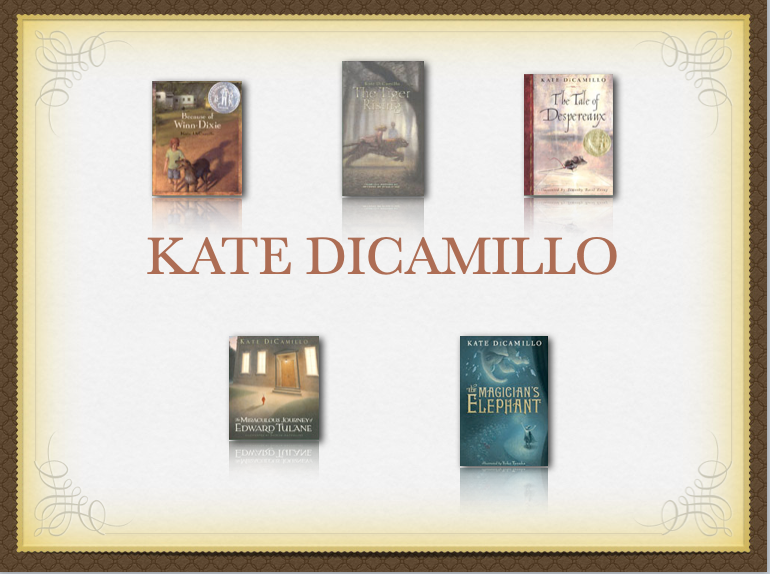 Visit Kate Dicamillo at ​ katedicamillo.com
Excerpts:
​The Tale of Despereaux: Chapter 1
​Because of Winn Dixie: Chapter 1
The Magician's Elephant: Chapter 1 to top of page 8 - "...she lives, she lives, she lives."
The Miraculous Journey...: pg 40 near bottom  - "As was to be expected..." to end of chapter.
Flora and Ulysses: Show comic strip intro & read Chapter 1; trailer - http://www.katedicamillo.com/books/flora.html